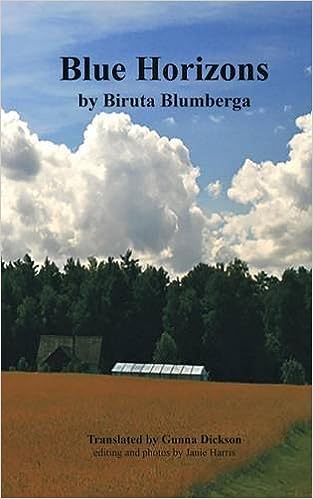 Latvia, 1940. Alberts Tiltens, just out of prison, returns to Mezozoli, his birthplace.The Soviet Regime has appointed him local Party organizer. His mission? To convince the people of this thriving agricultural community that the system that is about to oppress and control them will bring comfort and prosperity.
The Mezozoli people recognize such lies all too well. Tiltens knows they will not believe him.
Blue Horizons reflects the lives of the residents as they are dominated first by the inept and brutal Soviets, then by the ruthless Germans. The two armies advance and retreat over their farms, wreaking havoc on the Latvian countryside. As the power shifts, the sons of Mezozoli ally with one evil element or the other, while the locals hold out hope for their rescue by the British and the Americans.
Biruta Blumberga masterfully portrays the shattered tranquility of the hardworking country farmers- with their livestock and berry patches, clover fields and traditions – as they succumb to a tidal wave of uncertainty, oppression and violence. Within this frightening chaos, Blumberga sets her bold story of love, survival and family ties — of defeat, courage, love of country, resignation, domination, and Fate. 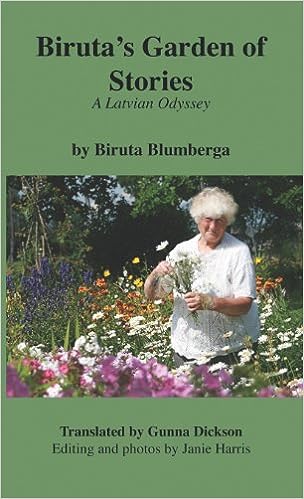 For five decades after WWII, Latvia lay forgotten behind the “Iron Curtain”. The lives and struggles of its people were thoroughly hidden from the world outside the Soviet Union. This collection of short stories presents an unvarnished portrait of life in Latvia during those times; times when a proud and productive people were subjected to the brutal whims of an oppressive and savage regime; a regime that actively sought to annihilate a people, its traditions, its values, its ancient culture. Blumberga’s stories offer a cinematic account of these times; as if shot through a sharp Latvian lens.

Reviews:
“Biruta’s Garden is a wonderfully astonishing collection of stories that reads like a novel in their continuity. This is about country people in the twentieth century. Biruta is a natural storyteller whose writing spoke directly to me with deep feeling and stoicism. Her descriptions of characters of every age and their relationships to each other and to the beauty of nature as well as the wonder and mystery of animals are exceptional. Every page is evocative of the Latvia and it’s people that I remember myself. Yet at the same time it felt basic and universal. Simply written, the English translation was excellent in that the language still contained the essence of Latvian. I found this to be absorbing fiction”. — Agate
“Wonderful book of short stories about life behind the Iron Curtain. It told of everyday experiences — have not come across a book like it about Soviet life.” — Ana

The Children of Siberia, Part 2

By Dzintra Geka (Author, Compiler)
Gunna Dickson was one of a team of translators who contributed to this collection.

The largest collection of Soviet deportation victims’ memories – the two-volume book “The Children of Siberia”. The collection was translated and published by the Children of Siberia Foundation. It received an award from the Latvian Association of Book Publishers as the most beautifully designed book of the year in 2012. The award is known as the “Golden Apple Tree” prize. In addition to being beautiful the book is also quite heavy. It has been published in a limited edition and may soon become a bibliographic rarity. Their importance lies in the potential to ensure the future generations becoming familiar with our national history. 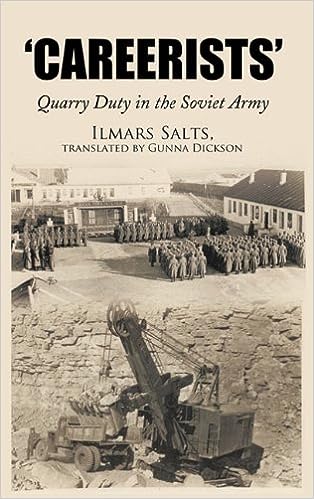 Ilmars Salts is the author of “A Stolen Childhood; Five Winters in Siberia.” The eldest son of Aleksandrs and Olga Salts, well-to-do land owners in southern Latvia, Ilmars was only 10 years old when, during the first Russian invasion of Latvia in 1941, the “Saltes” ancestral home was confiscated and the family — father, mother, grandmother and three children — were loaded onto a cattle train bound for Siberia. The inhumane work conditions, lack of food, and freezing cold killed his parents and grandmother and the orphaned children returned to Latvia in 1946. They were taken in by their mother’s cousins. Ilmars had only 5 and a half years to finish his studies and begin work when, at age 21, he was drafted by the Soviet army, where he found himself assigned to a battalion of Soviet “stepchildren” that had little to do with the military. The author, a retired electrical engineer, is a widower, and the father of two grown daughters. He regained ownership of his family’s home in 1996 and built a cottage for himself at the seaside. He feels it is his obligation to his parents and progeny to share this unvarnished story of what it means to lose your freedom, in the hope others will learn from it. 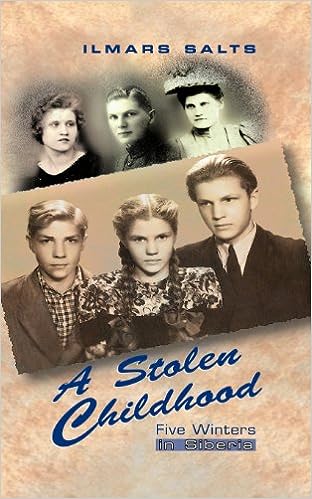 Ilmars Salts was only 10 years old when – on the morning of June 14, 1941 – his father, mother, brother, sister, and grandmother were awakened in their rural Latvia home and put into a cattle train bound for Siberia. To enable Russification, in one day alone, more than 15,000 men, women, children and elderly were rounded up and taken to Gulag death camps and deportation settlements. “A Stolen Childhood” evokes graphic scenes and acts of grave injustice, cruelty and unconscionable inhumanity as the brutal Siberian winters kill deportees, one after the other. There are no coffins and half-naked corpses are dragged by the arms of legs to their final resting place; a newborn is buried, still in the cradle. Dishes are scarce and food is ladled into a hat, or directly onto the table top. When deportees are put to work pulling logs out of the frigid Chulym River, their soaked garments freeze stiff in the Siberian air, but guards won’t let them near the bonfire – to hasten their demise. There are no toilets; human waste piles up or is eaten by starving pigs or dogs. The Salts children, orphaned in the third winter, incredibly, withstand the extreme hardships and return to their homeland as living witnesses and the keepers of history. In the decades under the Soviet regime, crimes were deliberately hushed up. Not until 1995-96 did the secret archives gradually become accessible, and deportees were free to speak about their experiences.

Review:
“A gripping tale of life under the Soviet Regime and the hardship it inflicted upon those caught under its rule” — Christopher S. Miskimon

The Red Fog: A Memoir of Life in the Soviet Union 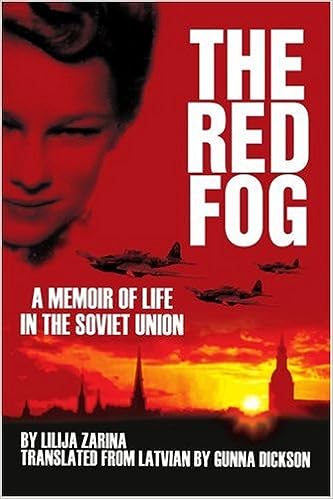 As a teenager during World War II, author Lilija “Lita” Zarina’s idyllic life of perfumed soaps, shelves full of books, and carefree parties explodes into irretrievable pieces after a Soviet bomb strikes her family’s property in Latvia. The Russian army demands the surrender of passports, radios, and typewriters, destroys books, and changes the local language and street signs. Independent thinking is discouraged and success is guaranteed for those who denounce God, family, and country to serve the Communist Party. Separated from her parents, Lita studies medicine at the University of Latvia and dreams of the day she can afford a decent meal. She earns a doctorate of medicine in 1950, but even a doctor’s monthly salary is not enough to buy a substandard pair of shoes. Lita’s trusting nature leads her into a bad marriage and makes her easy prey for a handsome but highly unscrupulous man. Ultimately, chance meetings, unlikely alliances, and unexpected developments come together to facilitate her escape from the suffocating red fog of Communism. A cautionary tale for anyone who cherishes freedom, The Red Fog is a memoir of one woman’s life behind the Iron Curtain that explores how political oppression dehumanizes people, while fear renders them silent and helpless.

Reviews:
“I came across this fascinating memoir when searching Amazon for books on daily life in the Soviet Union. “The Red Fog” is the autobiography of a Latvian woman who was a teenager at the end of World War II, when the Soviet Army drove the Nazis out of Latvia and then stayed to force the country’s absorption into the Soviet Union. She describes Soviet confiscation of property, deportations, coopting of educational and religious organizations to push communist ideology, and centralization of the legal and medical professions. We also hear her first-hand experiences with severe shortages of all kinds, especially food; the underground barter economy, including black-market healthcare; the special favors granted to Communist Party insiders and the pressure put on educated people to join the Party and spy on their neighbors; the constant threat of being reported for bourgeois sympathies; and extortion by a former boyfriend who had learned something incriminating about her.
The author eventually escaped to the West through Berlin. She is deliberately vague about this because, as she explains, she does not want to put at risk the people who helped her. She is also deliberately vague about dates and her own age at various periods, out of a similar desire to protect those who, at the time she wrote, were apparently still living under Soviet rule.
I wish the book had included something in the way of a translator’s preface, to tell us about when and where the book was first published and how this translation came about. As it is, the book just seems to have dropped out of the sky. The Kindle edition has a linked table of contents. It also has a fair number of typos and formatting problems, but since these appear mostly in the first 10-20% of the book, don’t be deterred by them. The book’s contents are priceless.” — Zeldock
“Absolutely fascinating book! I would recommend it to anyone who is interested in history. This truly shows the Soviet transformation from the inside and the idiotic ideology they pushed on people. Many places this book left my jaw hanging in disbelief of the system. Very fascinating and well written book. Highly recommended!” — Searcher
“A look inside the horrors of day to day life under communism….never let go of your dream of freedom. Excellent read.” — Wayne
“This book is the unthinkable truth of the atrocities that the people under Communist brutalism endured during the Russian occupation. It will open the eyes of the reader to all the things we take for granted and understand what freedom really is.” — Liv
“This book is an invaluable first person account of day to day life in the oppressive world of the Soviet satellite country of Latvia–a world that was carefully hidden from the West during the Cold War. It is also a compelling story of a young woman’s struggle with tremendous hardship in her quest to reclaim the freedom and dignity she loses when the Russians overwhelm Latvia after World War II. The translation conveys the intimacy of Lilija’s voice making it easy to be swallowed up in the quickly moving story which tells of the depths of human cruelty, and the strength of the human spirit.” — Paddler
“This just a page turner , it lets us look into the lives of Latvians under the Soviet regime . A great book , I sincerely recommend it to everyone . It is horrific to think that this has gone on in Latvija for the last 50 years.” — Anna M Hagen